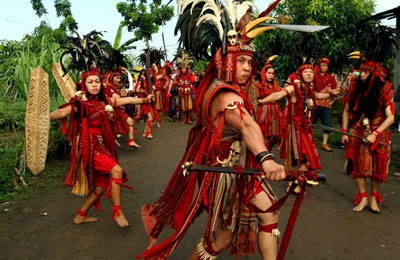 It is true Tomohon City of North Sulawesi Province has several beautiful dances for tourists to enjoy. The most famous one perhaps is Kabasaran Dance. Some people also call it the War Dance, actually. No wonder, the dancers carry some weapons while performing and they move both swiftly and in a fierce manner. Aside from being a local tradition (which is performed for generations), the dance also becomes an allure to attract outsiders or tourists to come to the region. In fact, it is considered the most popular one as compared to other dances.

The Nuance
As people may expect, Kabasaran Dance is performed only by men as it represents both bravery and strength. The thing is not all local men are allowed to perform it. According to the elderly, only those who are the descendants of Kabasaran dancers are allowed to participate. No wonder, those men inherit the weapon used by their ancestor and might give it to their sons later. When it comes to the costume, dancers wear traditional fabric of Minahasa having the dominant red color. As for the weapon, it can be either a spear or sword. What about the accompaniment? These include Kolintang, Tambur, and Gong.

Exploring Kabasaran Dance
During the performance, the first thing that tourists might notice is definitely the expression of the dancers. Those men look fierce and have their eyes wide open. It seems they want to show their war face and emit dominance. Carrying a weapon, they have a sturdy posture and move powerfully. These include moving back-forth and jumping, for sure. Not to mention they show attacking moves during the performance. At the end of it, though, their movements look more cheerful which represent the victory after a big war.

As for the participants, Kabasaran Dance only involves men who are the descendants of the previous dancers. These men have a different job, but most of them work as a farmer. For the information, they indeed perform the dance to entertain and retain tradition. However, they can also fight for their land if enemies appear. At the time, they become “Waranei” or the local warrior! That means these men are actually fighters who do the dance during the peaceful time!

For tourists who never visited Tomohon City, they should consider hiring a local guide who can tell thorough information regarding the dance. As an alternative, tourists can ask the elderly later. What about photography? Even though taking photos during the performance is allowed, tourists should not use the flashlight feature. It may disturb the dancers, after all.

How to Get There
It is recommended to come directly to Tomohon City if tourists want to watch Kabasaran Dance. If they come from Manado City, the trip may take around 52 minutes. After all, the distance is 25.1 km. As for the best route, it is recommended to take only Raya Manado Tomohon Street. Make sure to come during the special events when the dance is performed, though.