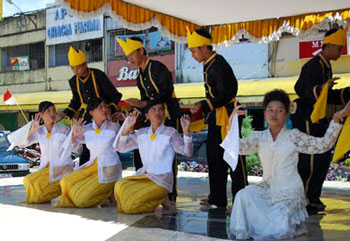 A vacation in Tomohon City becomes a new experience for most people. It is because they need to take some time and efforts to get to the region. So, what is it good for? Aside from visiting available natural attractions, tourists can also learn the local traditions or culture. Maengket Dance is not an exception, for sure. Actually, it belongs to Minahasa People but it is also performed regularly in Tomohon. Even the locals retain the tradition until now, especially during welcoming ceremonies, art performances, big harvest seasons, etc. Not to mention this group dance becomes a distinct entertainment for tourists who visit the region.

The Nuance
A group dance means that many people participate in the performance including men and women. However, Maengket Dance is usually performed by teenagers. They wear traditional attire and a unique headgear of North Sulawesi Province. For the information, the leader wears a costume with a different color. Also, each dancer holds a handkerchief as the prime accessory. In some occasion, they won’t carry any item at all. What about the stage? Well, the performance happens in an open field instead of a formal stage. When it comes to the accompaniment, two major instruments are Tambur and Gendang.

Exploring Maengket Dance
The first benefit in watching Maengket Dance is to learn the history and development of the dance itself. According to the locals, the dance has been performed since the Minahasa learned to farm. No wonder, it is quite related to the farming activity as well. It is said, in the past, villagers performed Maengket in order to celebrate the big harvesting season. The purpose was to show gratitude toward God’s blessing.

For the information, several differences exist in the moves between the past and present Maengket Dance. For example, the movements look simpler in the past. If tourists watch the current dance, they may see some improvements related to all aspects. That means it starts neglecting the origin features of the previous one. Moreover, these days, villagers perform it in various events including cultural ceremonies, art shows, welcoming parties, etc. While in the past, people only performed it after the harvest season.

In terms of name, Maengket Dance derives from the word “Engket” which means the up-and-down heels. This explains why the dancers focus on the heel movements while dancing. As for the participants, it is performed in a group! There is a leader, which is a female, as well. The nuance looks elegant and neat, actually. That means it may look boring to some people, but appear unique to others.

How to Get There
The best place to watch Maengket Dance is Tomohon City itself. From Manado City (the capital of North Sulawesi Province), the trip may take around 52 minutes as the distance is 25.1 km. Have no worries. This trip becomes faster if they take Raya Manado Tomohon Street. Also, it is recommended to hire a local guide who knows where and when the dance is going to be performed exactly.