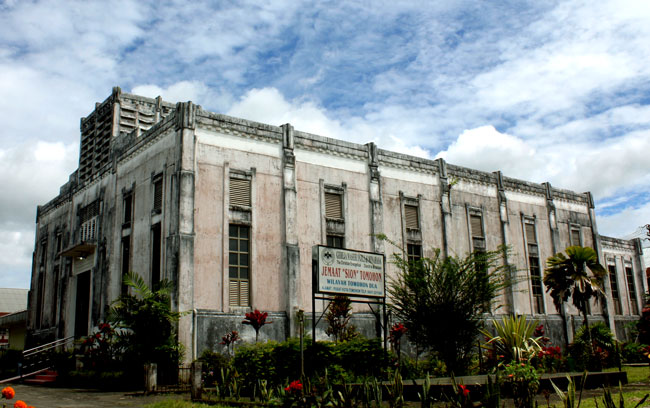 In the midst of Tomohon City, tourists may find a well-known church called Sion. The exact location is in Talete Satu Village and it belongs to Tomohon Tengah Sub-District. Due to the strategic location, many tourists often drop by and spend some time to either explore or conduct photography. These people are interested in both history and architecture of the building, after all. Even though Sion Church hasn’t become an official tourist site in Tomohon, it has gained a nice popularity among both locals and outsiders. No wonder, the number of visitors keeps increasing over time.

The Nuance
From the outside, Sion Church looks like a regular house. This explains why many people have an issue in distinguishing the building from others. When it comes to architecture, though, it represents the Dutch construction indeed. It is because the church was built during the reign of the Dutch in Indonesia after all. According to the locals, the building has undergone several renovations but it retains the basic architecture concept which is the Europe Neo-classic Eclectic. In terms of size, it is moderate and has the dominant color of white.

Exploring Sion Church
The first allure in Sion Church is definitely the history. This explains why many people come to the location to hear the story either from the keeper or nearby villagers. It is said the building has a significant role in the birth of GMIM organization. Not to mention it becomes the part of the history of the influence of the Christians in Tomohon City. According to the locals, the inauguration was in 1939. Tourists can ask their guide if they want to learn further information regarding such history, though.

Once again, Sion Church is located in the midst of Tomohon City. Thus, all people can access the site regardless where they come from. Even tourists can find it without asking a direction from villagers. As for the architecture, the building is worthy enough to enjoy photography. Even the outside parts of the church look like a regular local building, it applies the Dutch design. No wonder, tourists can spot it right away once getting near the church.

The good thing is tourists are allowed to enter the church, as long as they do not cause havoc inside. So, what is in there? Once entering the building, tourists can see an old podium used for preaching. Despite the old age, it looks sturdy and beautiful! Another old and historical object that tourists can find on the location is the old bell. Well, make sure to take photos of it later!

How to Get There
For those coming from Manado City, they may spend about 49 minutes to get to Sion Church. After all, the distance is 24.5 km. What they need to do is to get to Tomohon Tengah Sub-District first. Lastly, they only need to reach Talete Satu Village where the village resides. Make sure to take Raya Manado Tomohon Street for a faster trip, though.