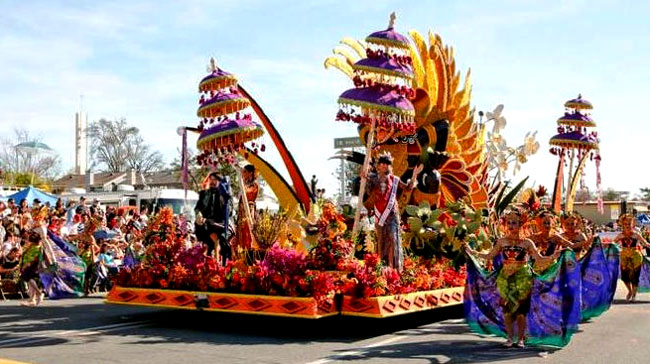 When talking about Tomohon City, many tourists might think volcanoes. Well, they are no wrong but they should be aware of other attractions too. For instance, there is the famous Tomohon Flower Festival. The locals conduct the event once in a year in order to celebrate the abundance and variety of flowers grown in the region. This explains why Tomohon is also called the city of flowers! During the festival, the participants prepare their float beautified with flowers. This parade looks so stunning indeed, especially for tourists in Indonesia! Not to mention the participants come from many regions including foreign countries!

The Nuance
It is true Tomohon Flower Festival consists of several phases, but the flower parade would be the most interesting one. The audience sits comfortably on the road waiting for each float or participants. Each of them looks unique and worth photo shoots, for sure. As mentioned before, many countries join the event and they try to promote the aesthetic value of flowers and the importance of culture as well. The good news is tourists are allowed to watch the event freely!

Exploring Tomohon Flower Festival
Before heading to Tomohon City for watching Tomohon Flower Festival, tourists should consider several things. For instance, it is related to the schedule. In order to avoid disappointments, it is better to talk to a tour guide first regarding the schedule. The next important consideration is the equipment. A camera is a must! Somehow, it is also important to carry bottled water and some snacks, as the event might last longer than expected.

For the information, Tomohon Flower Festival consists of several events. The most interesting one is called TOF or the tournament of flowers. In a nutshell, it is a kind of parade. The unique thing it is joined by many regions and it involves international standards when it comes to judging. As for tourists, they can freely watch and take pictures of those ornamented vehicles. Most of them come with colorful flowers and other stunning ornaments, in fact! The thing is the vehicles may run slowly and there are many of them. This makes some tourists inpatient when watching the ceremony.

The next event is called Kontes Ratu Bunga or the flower queen contest. As the name suggests, it determines the most suitable woman who has both skills and knowledge related to flowers. Moreover, all of them are beautiful! What is more? There is also an exhibition, displaying tons of flowers and floriculture designs. Another event is the culture and art performance done by the local artists. It is both meaningful and entertaining, for sure.

How to Get There
It is common sense. The best location to watch Tomohon Flower Festival is Tomohon City. For those coming from the capital of North Sulawesi Province (Manado City), they can directly head to Tomohon by available transportation service. The distance is 25.1 km, so the trip takes about 52 minutes only. As for the best route, it is recommended to take Raya Manado Tomohon Street for a faster trip.