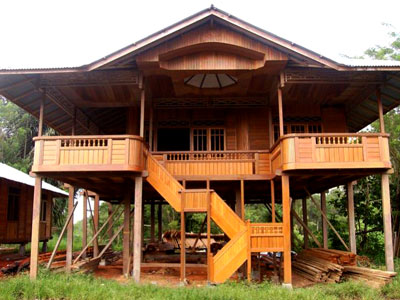 What comes to tourists’ mind when they hear Tomohon City? Well, most of them might think about volcanoes and lakes for sure. However, the region also owns a unique traditional house called Woloan Panggung. As the name suggests, this signature construction can be found mostly in North Woloan Satu Village in West Tomohon Sub-District. Not only it becomes the home of the locals, but the house also attracts tourists and outsiders from other regions. Those people are interested in the unique design and distinct beauty of those houses, after all.

The Nuance
The most noticeable characteristic of Woloan Panggung Traditional House is the design. The bottom part of the house is hollow, and it is supported by several pillars. The purpose is to avoid animals and floods. That means people need to climb the house in order to enter it! Have no worries. It features several stairs located on both sides and back of the building. As for the materials, woods are the prime resources. Many types of woods are used, though, including Cempaka, Nyantoh, and Aliwowos. As for the roof, it can be either “sirap” or “seng”. For the information, these houses are built in the midst of trees and bushes. That means the atmosphere is quite refreshing and natural there.

Exploring Panggung Traditional House
Well, people can learn many things from Panggung Traditional House in Woloan. For example, it is related to the function. There must be a reason why the locals use the design, no? It is said the purpose is to avoid both disasters and wild animals. The wooden materials are safe during an earthquake. As for the hollow basement, it is used to prevent both floods and animals (as mentioned earlier).

In terms of aesthetic, Woloan Panggung Traditional House is also worthy. It looks different than other houses, after all. No wonder, many tourists, and outsiders are interested in visiting the village in order to watch the house directly. Some of them also want to explore the house and learn the architecture aspect of it. Not to mention the house is worth photography. This is why everyone should not forget to carry a camera when exploring the house later.

Another reason why people keep coming to the site is to buy the house! It is true that villagers produce and sell those houses to outsiders with an expensive price. However, buyers need to arrange and install it by themselves on their land later. This knock-down system is considered efficient to villagers because they don’t need to come to buyers’ land or build the house there.

How to Get There
In order to see Woloan Panggung Traditional House, tourists should head to North Woloan Satu Village first, without a doubt. The distance between Manado City (the capital of North Sulawesi Province) and the village is 26.7 km. That means the trip may take about 52 minutes to reach the destination. For the information, they should take Raya Manado Tomohon Street for a faster trip!