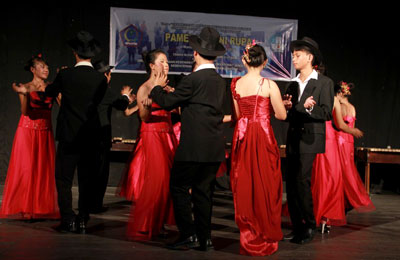 In Tomohon City, tourists may find several unique dances including the one called Katrili. Like others, the dance belongs to Minahasa Tribe and it has become the part of the local culture for generations. So, what makes it different? In terms of function, it is merely an entertainment done by villagers during a special occasion. The purpose is to entertain and unite people regardless of the gender and age. The good thing is both men and women are allowed to participate or become the dancers. For the information, it is performed on several occasions like culture festivals, welcoming ceremonies, and local weddings. Thus, tourists should only come during those events if they don’t want to miss the opportunity in watching it.

The Nuance
Unlike Kabasaran Dance (War Dance), Katrili looks casual and entertaining. Not to mention it is performed by teenagers! As for the accompaniment, the main musical instrument is Kolintang and it emits the cheerful rhythm. The thing is the locals prefer to use recorded music instead of performing it live. It is because they have adapted to the modern culture, so they look for a more efficient way when it comes to accompaniment. What about the costume? Well, instead of wearing traditional attire, the dancers wear a European-style costume. The female dancers wear stunning-colored attire while the males wear a tuxedo with a hat.

Exploring Katrili Dance
The first thing that tourists can get from Katrili Dance is definitely the history. Well, they can get the information from villagers after all. In a nutshell, the dance was born due to the mixed culture between the Minahasa and Europe. Even though it looks like a modern dance, Katrili has been there since the first arrival of the Spaniards and Portuguese! At the time, those people come to Sulawesi Island in order to cultivate spices. In order to celebrate their prosperity, they performed that dance during leisure times.

The next important thing to learn about Katrili Dance is related to the function or meaning. In a nutshell, it functions as the local entertainment and medium to unite villagers. Also, it represents happiness or cheerful. In terms of tourism, though, the dance helps the region to attract more visitors especially those who live outside the island.

Katrili Dance usually involves 12 dancers consisting of 6 males and 6 females. One of the female dancers leads the performance and gives the instructions to others. The nuance is merry and cheerful! Not to mention the attire looks so astonishing and elegant. Watching the dance is definitely quite entertaining! Tourists are even allowed to take pictures during the performance.

How to Get There
If tourists come from Manado City, they at least need to spend about 52 minutes to arrive at Tomohon City. It is because the distance between those cities is 25.1 km. As for the fastest route, it is none other than Raya Manado Tomohon Street. Also, it is recommended to use the best vehicle to get to the destination.